Companies that follow a Good Jobs Strategy design and manage their operations in a way that allows them to achieve three outcomes at the same time: 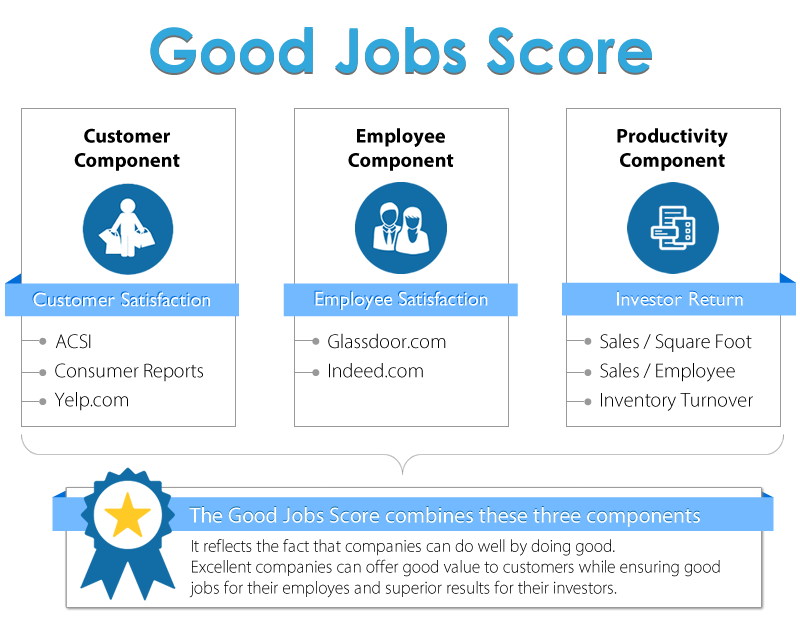 The first industry we examine is grocery/food retailing. We are hoping to get feedback on our methodology, refine it, and then scale the Good Jobs Score to different industries.

The companies analyzed were selected from the group of retailers identified with the SIC code #5411 – Grocery Stores, as determined by the U.S. Department of Labor, Occupational Safety & Health Administration (OSHA). All grocery stores in this category that publicly filed with the S.E.C. and operated in the U.S. in 2014 were considered. In addition, three U.S. retailers that carry groceries were considered — Costco (SIC code #5399 – Miscellaneous General Merchandise Stores), Target (SIC code #5331 – Variety Stores) and Walmart (SIC code #5331 – Variety Stores).

) are an aggregation of each component’s sub-scores (

). For each component, sub-scores are collected from secondary data sources (as indicated in the overview section). Because sub-scores are on a variety of scales they are normalized to a uniformly distributed relative score scaled between

. The component score is then the arithmetic mean of the scaled sub-scores.

We use data from American Customer Satisfaction Index (ACSI), Consumer Reports (CR), and Yelp.com to create the Customer Score.
ASCI, developed at University of Michigan, conducts phone surveys with customers to develop a satisfaction score for each company. ASCI has been used in a wide range of contexts and has been shown to be a leading indicator of company’s financial performance. Where ACSI provides multiple scores for a company in different industries, we use the mean of those scores. In cases where there are two ACSI scores for multiple retail names under the same corporation, we use the average ACSI score weighted by revenue.

The Consumer Report Ratings are based on 62,917 responses to the Consumer Reports’ 2014 Supermarket Survey, reflecting readers’ 111,208 shopping trips between March 2013 and July 2014 and don’t necessarily mirror the experiences of the general population. The results reflect respondents’ overall satisfaction with the shopping experience as described in that survey and are limited to that specific purpose. Because Consumer Reports provides its survey ratings on a retail name level, we use the average of those scores weighted by the number of stores for a corporation.

Yelp.com has collected over 77 million reviews from customers who provide a rating as well as a qualitative review of their experience with local companies. Respondents to Yelp.com are self-selecting and thus the data cannot be considered to have been gathered from a random sample of customers. For the 14 companies in our data, the correlation between Yelp and Consumer Reports is 0.79 and between Yelp and ASCI is 0.93.

Respondents to these sites are self-selecting and thus the data cannot be considered to have been gathered from a random sample of employees. For the 14 companies in our data, the correlation between Glassdoor and Indeed is 0.96.

Below, we describe each of the measures and highlight some of the challenges associated with them. Although the metrics we use are far from perfect, they are easy to interpret, are available across all companies, and provide a starting point for evaluating productivity differences across different retailers. Our hope is that when companies disclose more and better operational data we will be able to incorporate it into our analysis to better assess productivity.

We use sales/sqft as the measure of space productivity. Below are some challenges associated with this measure:

We use inventory turnover (cost of goods sold/average inventory level) as the measure of inventory productivity. Because companies use different valuation methods for their inventories, we adjust all companies’ inventories and costs of goods sold (COGS) to FIFO by adding the LIFO reserve back to the inventory and reducing COGS by the year-over-year change in the LIFO reserve. The following companies report a LIFO reserve and are therefore subject to this adjustment: KR, PUSH, SWY, WMK, WFM, COST, TFM, and RNDY.
Below are some additional challenges associated with this measure:

We use sales per total number of employees as the measure of labor productivity.